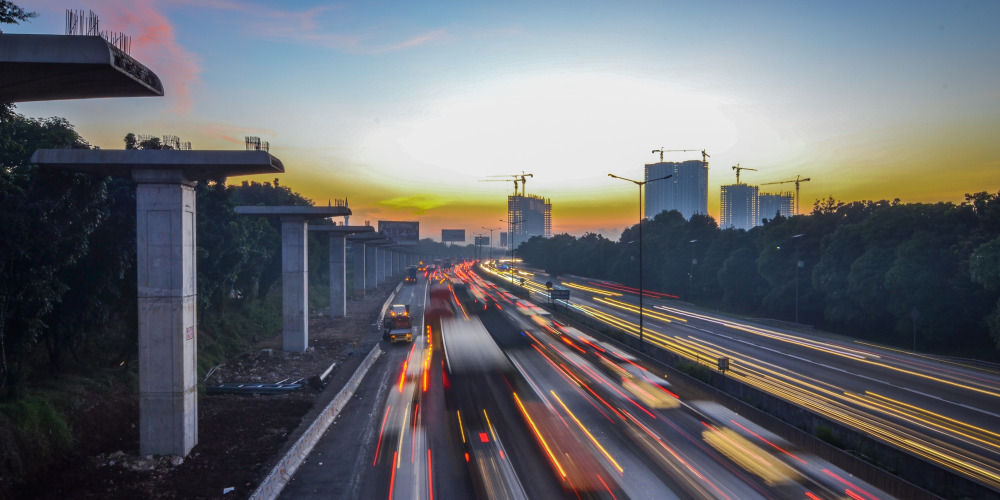 Congestion caused by the construction of an overpass

The plan was to ease the congestion in Mudik during the Levaran holiday in June 2019, but even though the progress is said to be 60% or 70% so far, there are some places where bridges are not even built yet, and it is clear at a glance that we will not be able to make it in time for this year's Levaran holiday even if we carry out the construction work on a 24-hour basis.

From our office in West Bekasi Barat to the industrial park in West Karawang Barat is a distance of about 30km, but the crane vehicles blocking the overtaking lane to work on the sides and underside of the bridge frequently cause temporary traffic jams, and there is also a chronic traffic jam caused by the bottleneck where the road narrows beyond the Cikarang Utama tollbooth, which usually takes about three hours to return from West Karawang in the evening, and not once or twice more than five hours at worst. 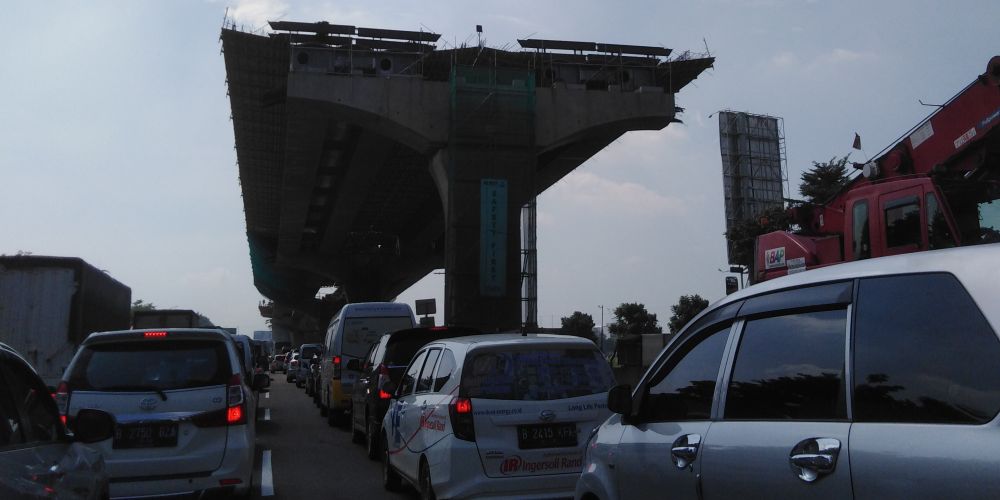 In addition to this, no matter what the traffic jam is terrible, police cars, TNI (Tentara Nasional Indonesia Army) or RF-numbered state officials (Pegawai negeri sipil) cars will force their way into the road while honking their horns, forcing us to turn right and left to give the way.

RF numbers are given to officials above Eselon II (second in class).

However, highway users are holding back in the hope that the 39-km section from Cikunir KM9 to West Karawang Exit (Gerbang Tol Karawang Barat KM48) will become a comfortable and stress-free highway with two lanes per side and a maximum speed of 100km when the elevated road is completed. 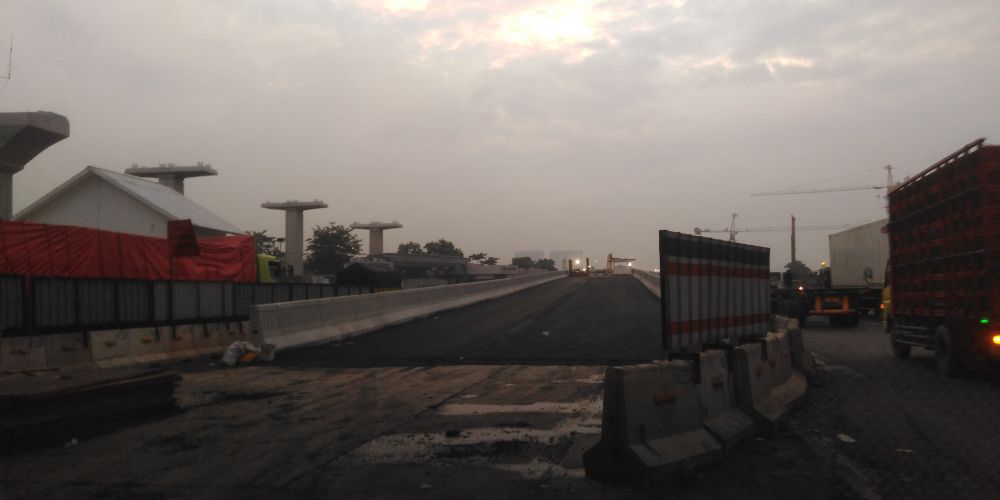 The entrance to Cikunir at KM 9km under construction. On the left is a pillar of LRT.

The final West Karawang exit can be made about one kilometre further east than the existing Tol exit, so it is hoped that our company, which has offices in West Bekasi, will be able to visit customers east of East Karawang and beyond by going up the overpass from Cibitung and getting off at West Karawang, which will improve access to the distant industrial park, which has been hampered by traffic congestion.

The elevated construction work will be undertaken by state-owned construction company PT Waskita Karya (WIKA) and Astra Group's PT Acset Indonusa (ACST), while concrete will be procured from PT Waskita Beton Precast, a subsidiary of Waskita, and rebar will be procured from PT Bukaka Teknik Utama, a relative company of Vice President Jusuf Kalla. If you look closely, you can see the BUKAKA logo on each of the bridges.

Advantages and Disadvantages of Elevated Highways 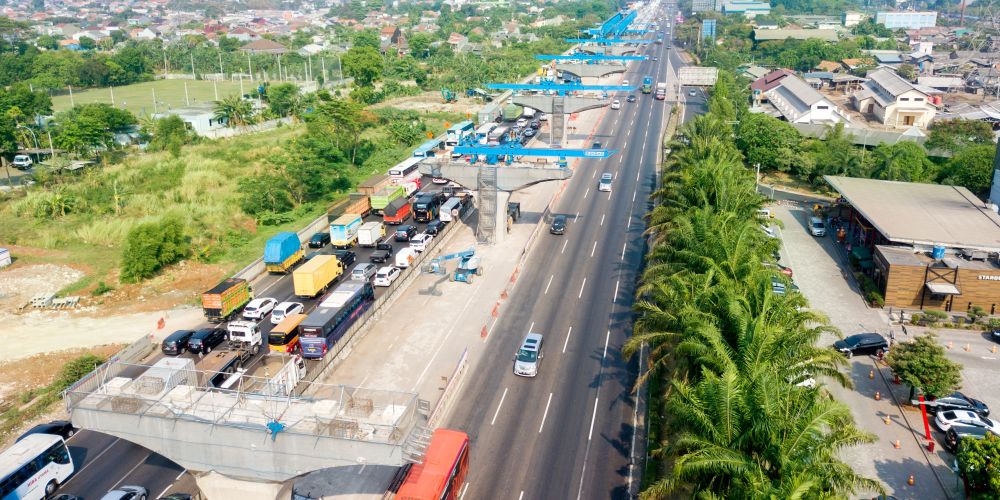 In the Sosrobahu method, the arm is placed on the pillar parallel to the road once and then rotated 90 degrees.

This time, the elevated building has two lanes on each side, one on the way up and one on the way down, as shown in the photo on the left, with a total of four lanes in the center and supported by a single pillar and arm.

The construction procedure is to make a pillar first, put an arm on it, and then put a bridge on it. However, the size of the arm is long enough for four lanes in the part where four lanes are put together, and the arm with the width on both sides would be an obstacle to the traffic below. 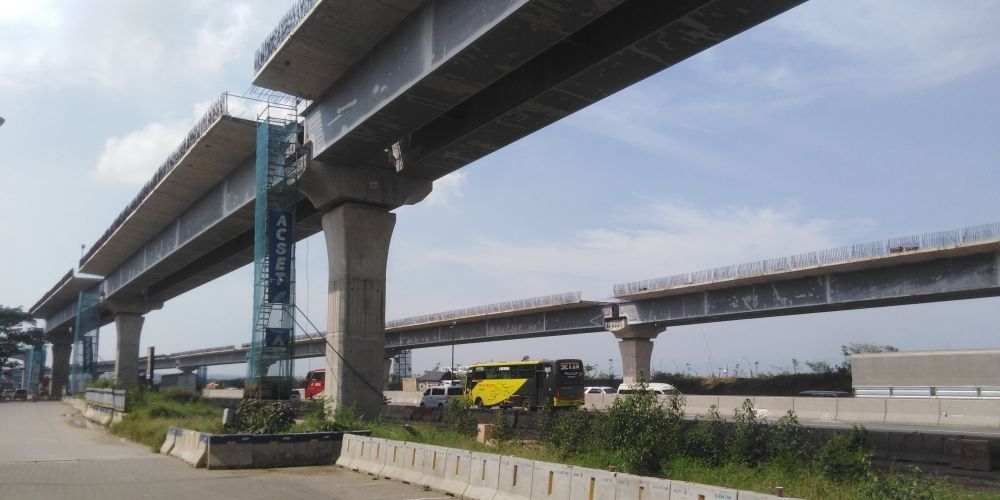 Near the KM39 Rest Area, there are two separate ascent and descent routes. I can see the construction company ACSET.

Just as Tokyo's Metropolitan Highway is being built along the river to avoid land ownership issues, the Tol Jakarta-Cikampek overpass will be built on top of the existing highway, so no new land acquisition is required.

The advantages of elevated expressways are that there is no need to acquire new land and construction can proceed without interfering with existing traffic conditions, while the disadvantages are the risk of major accidents such as collapses and disruptions due to vulnerability in the event of a major disaster, higher construction costs that result in higher post-opening user fees, and the need for taxes to cover these costs.

With the goal of becoming one of the world's 10 largest economies by 2030, Indonesia has announced 10 national priority initiatives called Making Indonesia 4.0 as part of its commitment to Industry 4.0.

In addition to the current elevated construction, the opening of the new port of Patimban in Subang, West Java, is scheduled for 2023, and the unipolar concentration of logistics from the industrial park to the port of Tanjung Priok is expected to be eliminated, which will dramatically improve the traffic situation in the suburbs of Jakarta five years from now.

(December 2019 postscript.)
The second Cikampek Expressway (Tol Jakarta-Cikampek II or Jalan Tol Layang Jakarta-Cikampek) finally opened at the end of December 2019 and I ran it during the free period of the year. It is hoped that the new road will extend the Jakarta Economic Zone further east, contributing to Indonesia's economic development. 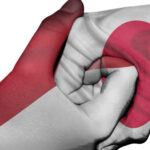 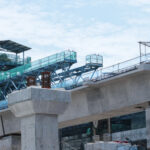 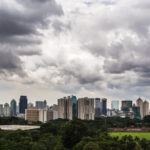