New Normal, a code of conduct for Indonesia after the lifting of the PSBB (Large-Scale Social Restrictions)

Preparing for the post-PSBB release

Yesterday, President Jokowi visited the Smarekon Mall near his home in West Bekasi to inspect its preparations for the reopening of operations on June 8.

Since yesterday (May 26), the army (TNI) and police (POLRI) local governments (Pemerintahan Daerah) have been deployed at 1,800 targeted locations including traffic hubs, malls, markets and tourist destinations in four provinces (provinsi) and 25 districts (kabupaten) to check that the wearing of masks, social stanchions and hand washing encouragement as health procedure discipline (Disiplin Protokol Kesehatan) is being followed in line with the PSBB and a large number of police officers were on standby today at the Tol (Expressway) West Bekasi exit checkpoint.

In a speech yesterday, Jakarta Special Provincial Governor Anis said that the decision to re-extend or not to extend the PSBB, which is scheduled until June 4, is up to each citizen's awareness, but the code of conduct for citizens at the end of the PSBB will be set out in a procedure called New normal (Normal baru in Indonesian) and will be phased in from June 1.

The term "new normal" is a concept used in the context of an extraordinary event becoming a new normal in response to the financial market changes that occurred after the Lehman shock in 2008, and although it is a concept that represents a new normal in contrast to the normal under regulation by Indonesia's PSBB, it follows the roadmap for post-Corona economic revival announced earlier this month by Indonesia's Ministry of Economy, Trade and Industry.

Compared to this roadmap, New Normal has moved the schedule forward slightly, with all restaurants and other establishments reopening for business in June and assessments in July, with the goal of restoring the economy and stopping the increase in unemployment. 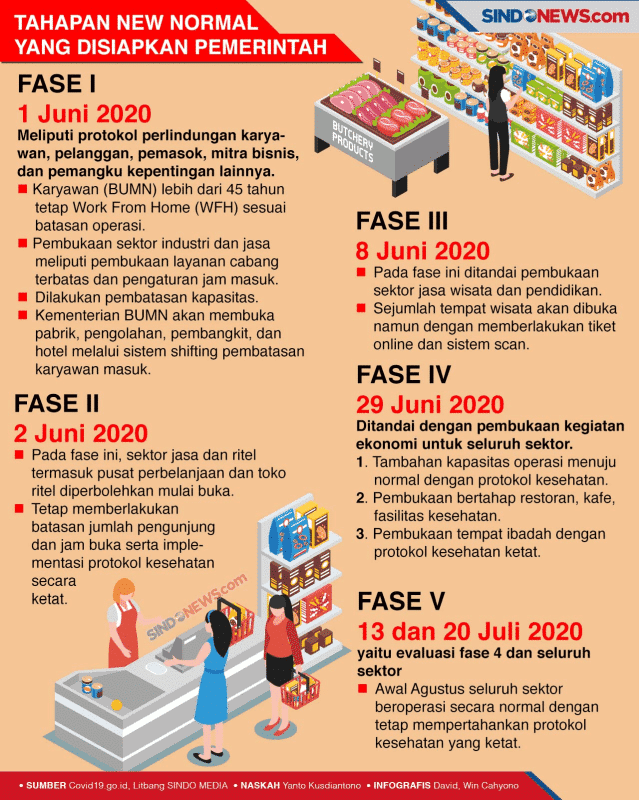 However, there are three indicators to be achieved by each municipality in transitioning from the PSBB to the new normal, and considering the current infection situation in Indonesia (the increase in the number of infected people on May 26 was 415 nationwide and 61 in Jakarta), it is a very difficult target to achieve.

The recent decision by the Minister of Insurance on the New Normal code of conduct to be followed in general companies and manufacturing (nomor hk.01.07/menkes/328/2020), which stipulates how to work in offices and factories under the New Corona pandemic, is gradually leading to a return to normal corporate activities while dealing with the coronavirus.

The process for terminating an employment relationship in Indonesia

According to Labor Law UU No. 13 Tahun 2003 (Law No. 13 of the Republic of Indonesia on Labor 2003), the methods of dismissal are: violation of the rules of employment (PP = Peraturan Perusahaan), dismissal after three warning letters (Surat Peringatan), dismissal for incompetence within three months of the probationary period, and voluntary retirement.

The difference between Komisi, Markup and Korupsi (corruption) in Indonesia

Although a commission is a percentage agreed upon by each other prior to the transaction, and a markup is a markup without prior agreement, it cannot be said that a markup is illegal as long as the provisions regarding commissions are not clear and there is no obligation to disclose the percentage of the commission to the purchaser.

While Indonesian law is divided into the Criminal Code (Hukum Pidana) and the Civil Code (Hukum Perdata), KPK is an independent body (Lembaga Independen) and has the power to carry out its own investigations and prosecutions (bringing to justice), originally carried out by the prosecution (Kejaksaan), for allegations that are suspected to involve legislative, executive and judicial bodies.

The reason why it is often said that Indonesian workers are well protected by labor laws is the difficulty of dismissing them at the convenience of the company and the severance pay that can be greatly inflated by years of service.