The Closing of the First McDonald's Store and the Historical Background of Sarinah Department Store【The Garuda Merchant, a classic novel about Indonesia】

The first McDonald's in Indonesia, Sarinah Department Store, will close after today, May 10.
While Jakarta's shopping malls continue to be modernized with new concepts, the Sarinah department store and the Pasaraya in Block M, which were the staple meeting places for young people when I first arrived in Indonesia more than 20 years ago, have been completely left behind.

Since then, McDonald's has been a more important and friendly symbol for Jakarta kids (Orang Betawi) than Sarinah Department Store itself, and back in the days when there was a Hard Rock Café on the second floor, they would meet at McDonald's first and then go to the concert.

When I came to Indonesia in 1997, I asked an older sister at a cafe who took me to a welcome party at the time to be my Indonesian language teacher, and she corrected my weekly memos of questions and answers every Sunday at McDonald's.

I knew that she liked me as an Indonesian teacher, but I wanted to improve my Indonesian, and I thought of our relationship as a complete teacher and student, so when her frustration with me reached its limit, I decided to start dating her. I ended this platonic relationship. Looking back, I'm sorry for being so cold.

I ordered an egg muffin set from the small cash register on the north side of McDonald's No. 1 in Salina, which closes at 10 p.m. tonight. I think this is about the only time I've played up north until the weekend morning and had a review meeting here anyway. The employees are moving to other stores. pic.twitter.com/MVz0Bf7NNl 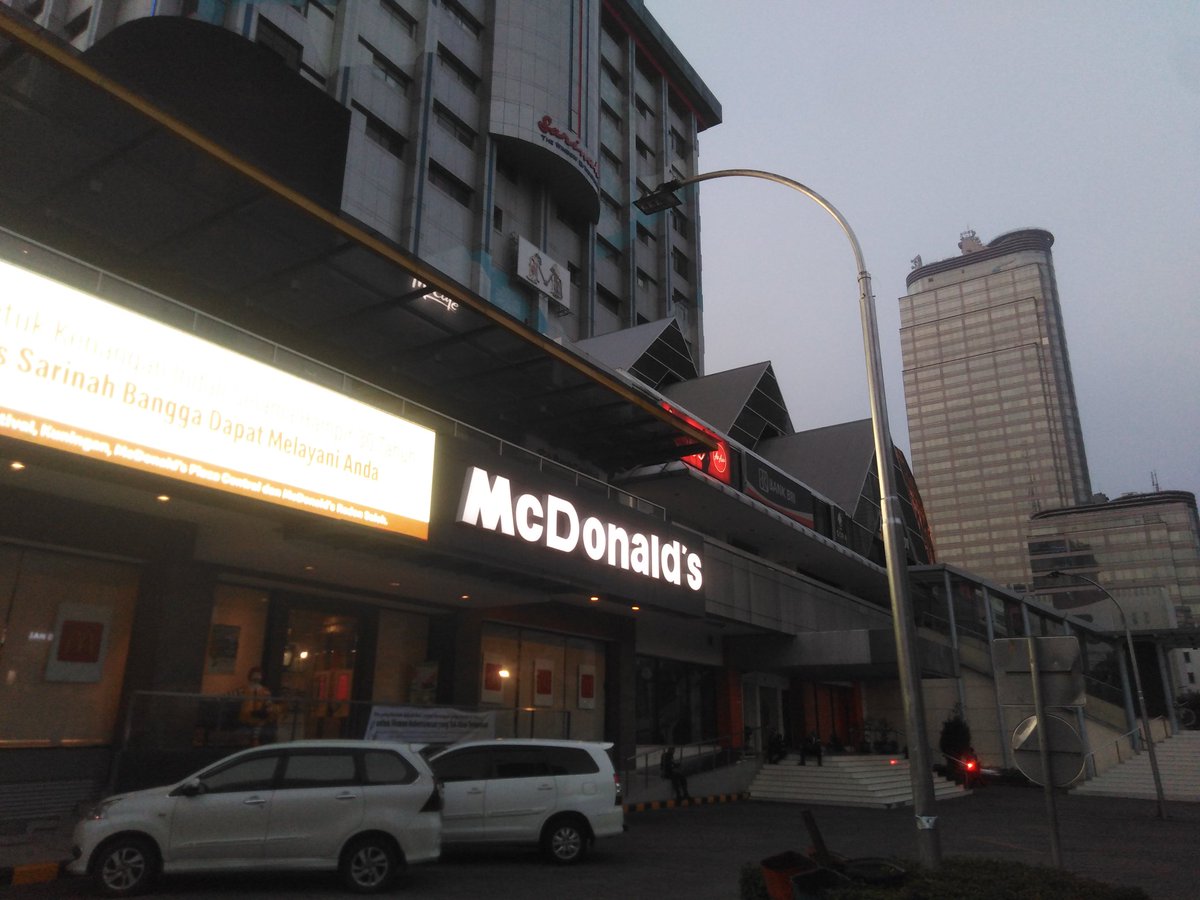 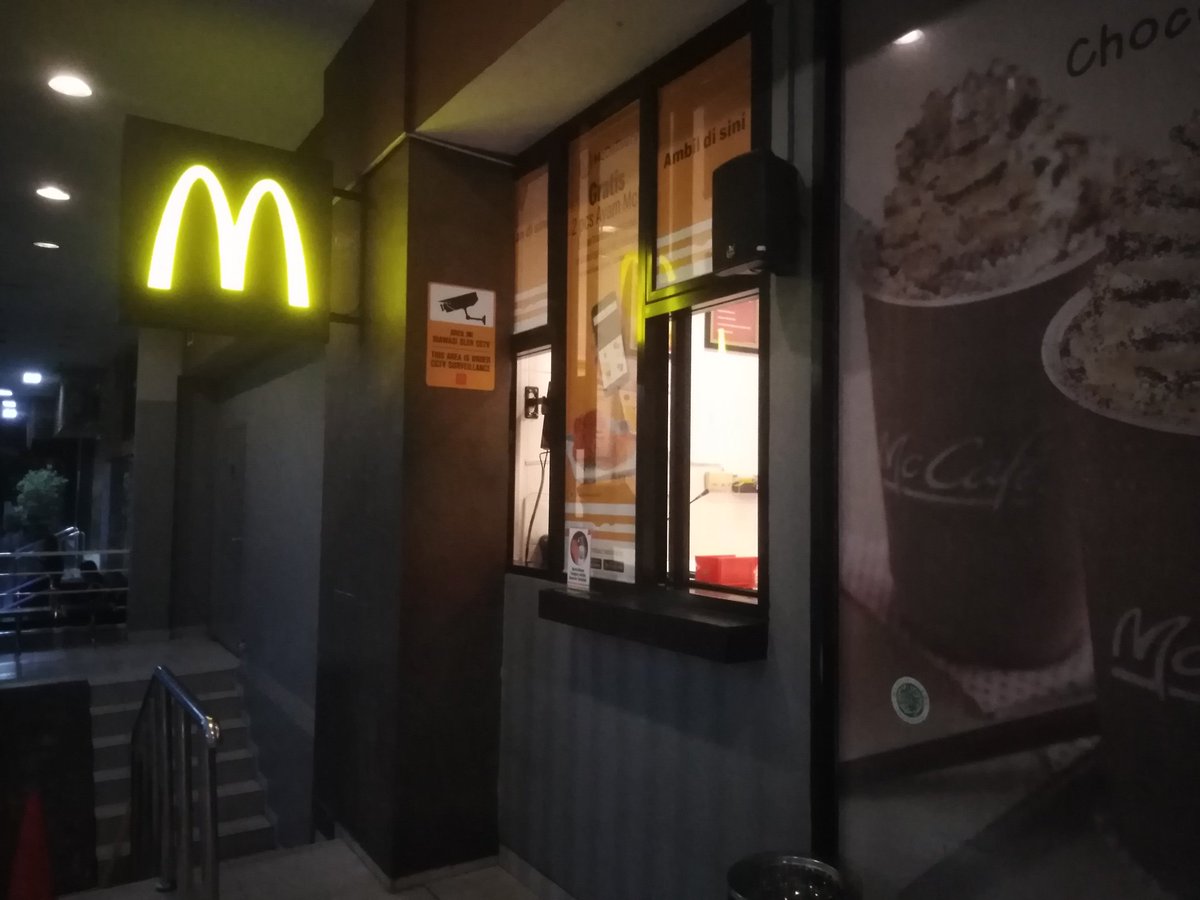 Every Saturday, I would hang out with the girls from various cafes in Block M, starting at 1am after work at the Sydney 2000 or Stadium in the Cota area until the morning, and then take a taxi to McDonald's in Sarinah when the skies were white, but my routine was
As I ate breakfast with these exhausted girls, I remember the dazzling sight of the healthy people who had gathered to sweat it out at Carfriedy, and the anxiety of the gap between me and the momentary, decadent life I was leading.

In the second half of Yusuke Fukada's "The Garuda Merchant," which is becoming a legend as a novel about Indonesia, it is mentioned that the Sarina Department Store was named after the nanny of Indonesia's first president Sukarno, and was the first large department store chain in Indonesia.
The Japanese trading companies fought fiercely with the Japanese government and the Soekarno administration for the award of the construction project, using Japanese loans for post-war reparations to finance the project.

After being appointed by the President of Japan to award the project, the Japanese trading company is responsible for getting the Japanese government to provide post-war reparations to fund the Sarinah project, or to arrange a yen loan secured by reparations with the bank and to manage the project through the construction company.

Throughout the story, a Japanese trading company lobbies bigwigs in the Japanese government to get the president's nomination for the project, and uses a Japanese woman as a "human servant" to win the favor of President Sukarno, who is weak on women, but
The film depicts how one of them, Dia (modeled after Mrs. Devi, whose maiden name is Shimpoko Nemoto), survives the conflict of interest by playing tactics with the president and a Japanese trading company.

The president of Toho Trading (modeled on Tohyama Trading) is a weak trading company, but thanks to the political power of the president, he is entrusted with the reception of President Sukarno during his visit to Japan, and the president cannot overlook the fact that Naomi (Shichihoko), who was singing at the club "Manuela" in Ginza (modeled on the club "Copacapana" in Akasaka), fell in love with her beauty and beautiful voice.
Naomi is sent to Indonesia through Tominaga (modeled after Masaya Kirishima, the owner of KIRISIMA restaurant and the J-Clinic, a Japanese clinic, who passed away in November last year).

I had the pleasure of working with Mr. Kirishima once when he was alive, and I had the impression that he was an honest person who had gained the trust of the people around him with his honest character.
Naomi is confused by the unfamiliar environment, but by being a sounding board for her and gaining her trust.
He gains the trust of the President, who falls in love with Naomi, and helps Toho Shoji to compete on equal footing with major trading companies for compensation projects.

In the end, the president of Toho Shoji, who thought he was using Deere to his advantage, was shut out of Indonesian business in the Sarinah project when it was discovered that he had cheated on a rebate of 6% of the value of the order, a rebate called Revolutionary Fund, raised through Sato Chu Shoji (modeled after Itochu).

The word "theatrical" as conceived in Lombok, Indonesia

Lombok Island, only 50km east of Hindu Bali, is a Muslim cultural sphere, and Indonesia was dominated by Hinduism and Buddhism until the 15th century, and Islamized after the 15th century.

Anti-Communist symbolism, the Panchasila Sakti monument and the "Betrayal of the Communist Party" museum【The September 30 incident that changed the balance of power in politics】

The September 30 incident, an attempted coup d'état by the Indonesian Communist Party, upset the balance of power between the communist and nationalist forces that supported President Sukarno, and the Suharto regime after the March 11 political upheaval caused Indonesia to veer completely toward an anti-communist line.

After voting in Indonesia's presidential election last April 17 at polling stations TPS (Tempat Pemungutan Suara) across the country, a grueling ballot counting process that resulted in more than 500 deaths in about a month, the results of a quick count (a preliminary election based on exit polls) by research firms (Libang Kompas, Indo Barometer, LSI Denny JA, Median, Kedai Kopi) showed that current President Jokowi, supported by Indonesia's largest moderate Islamic organization NU (Nahdlatul 'Ulama), was expected to win more votes in East Java from Central Java, while Prabowo, supported by the radical FPI (Front Pembela Islam), was expected to win more votes in Sumatra from the more Islamic West Java.

The footprints of the old Japanese you'll see in Jakarta

Today is the last day of the Heisei era, and tomorrow will be the first year of the Reiwa era.

First President Sukarno handed over power to Suharto after the September 30, 1965 incident and the March 11 incident; Vice President Habibi was elevated to the presidency in the wake of the social turmoil caused by the 1998 riots; the Democratic Party of Struggle became the leading party in the 1999 general elections under free party action, but President Wahid was elected president nominee was born.

System development templates for business in Indonesia. How systemize business flow in Indonesia? In order to systemize business flow, it is important to implement system step by step with simple functions in Indonesia. Implement system at low cost and short delivery time. Systemize purchasing of consumables and spare parts. Implement a interface system to connect with the current main system. Implement sales support system using handy terminal. CONTACT By using business template Hana First, you can progress systemization step by step according to the on-site priority. Systemaize step by step from the highest priority in the work flow Benefits of systemization ...

Are you having trouble with your production control operations? Is there any trouble with production control work? The environment surrounding the manufacturing industry in Indonesia is undergoing drastic changes, and further improvements in the entire production process and improvement in production efficiency are required at the factory. Make a production plan and purchase plan from customer forecast and sales order. Save labor cost in inventory control by using barcode. Centralize master data and make it an internal asset. Implement the system at low cost and short delivery time. Output a comparison report on planned production and actual production. CONTACT Step1：Visualization ...