KOPI LUWAK is one of the rarest coffees in Indonesia with a mellow aroma. 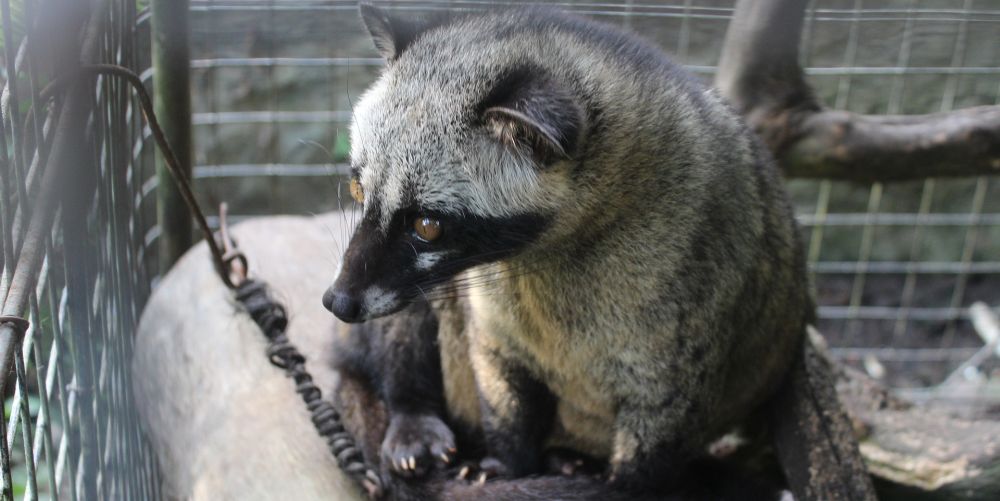 Rare and expensive coffee refined from undigested feces of civets 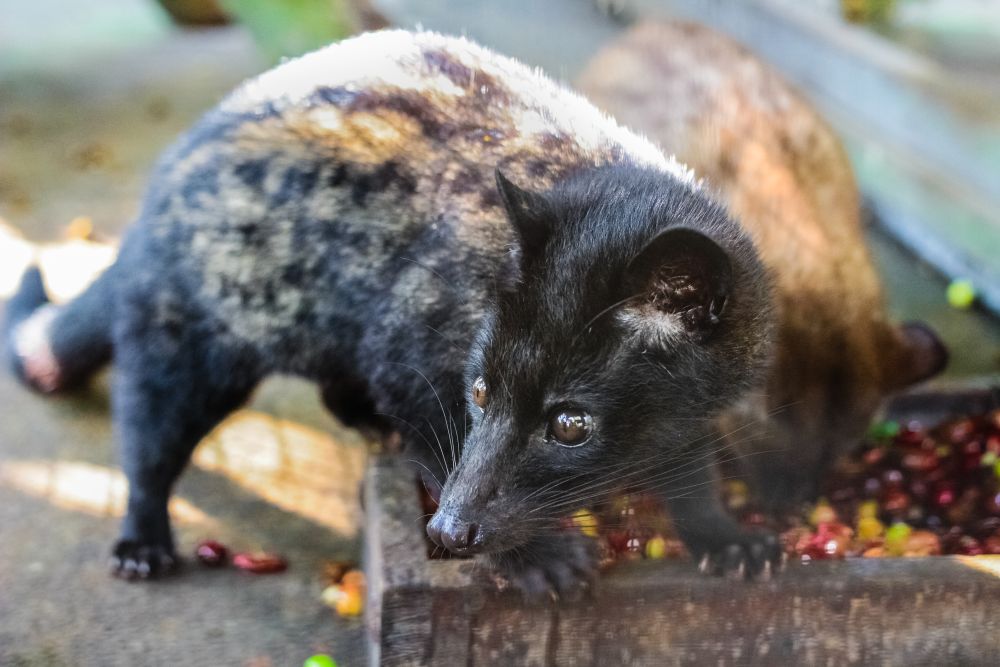 Luwak looks more like a mouse than a cat.

When you hear that the luwak is a civet cat, it's easy to imagine it napping in the sunshine on coffee beans, but in reality, it has a long nose and a slightly evil face that looks more like a mouse than a cat.

The name luwak is the local name for the civet, so few Indonesians in Jakarta can answer the question of what kind of animal luwak is at best, they're told it's a weasel (musang).

In fact, it seems that weasels are the weasel family and muskets are the muskets, a more primitive kind of animal than the feline family.

It looks like the devil incarnate, and in fact in 2014-2015 there were incidents in the Sukatani to Tambun area of East Bekasi where money in the house disappeared in the middle of the night along with the smell of luwak coffee for about two weeks in a row, so much so that rumors were spread that this was the work of the devil of luwak coffee (Setan kopi luwak).

It's called "the most expensive coffee in the world" or "a phantom coffee" and it's priced at over 1,000 yen a cup in Japan, but it's an unusual coffee that doesn't refine coffee cherries but refines the undigested feces of civets that eat coffee cherries. 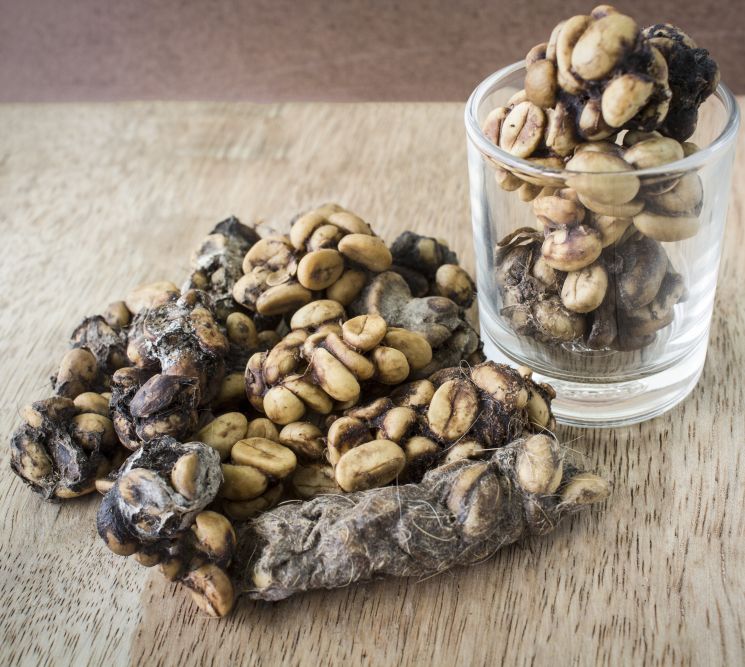 I don't know if the act of drinking this kind of feces mixed with hair is cultural or primitive, but it may be a sign that we have to go back to eating feces in order to satisfy the desires of the degenerate humanity.

Luwak coffee is made from undigested and fermented beans found in the feces of an unidentified civet mammal, but in recent years, the mainstream is "farmed" luwak feces raised in cages.

It is more efficient to keep them in cages and collect feces regularly than to look for "natural" feces that have actually fallen into the forest, but the poor environment in which they are kept is regarded as a problem and sometimes criticized by animal rights groups.

Kopi luwak is more than 6 times more expensive than Ache Gayo at 140,000 RP/100g. It makes sense that natural products are refined from the feces of wild luwak or musang, which instinctively selects and eats delicious coffee cherries, and cultivated products have a completely different flavor because they are eaten by humans in a gauge and then discharged.

On the one hand, it is hailed as the matsutake mushroom of the coffee world, and on the other hand, there are many inexpensive products in supermarkets and souvenir shops that bear the name luwak, which is neither poison nor medicine. 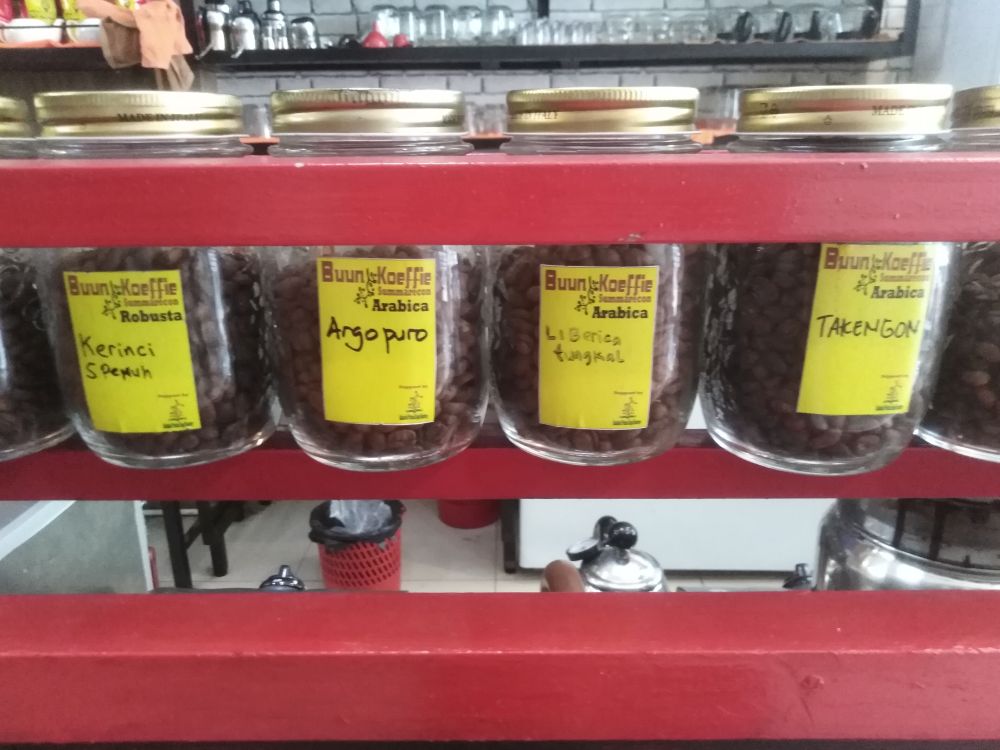 Kedai Kopi in front of the office.

Indonesia is a country located in the coffee belt because there are many areas that meet the conditions suitable for coffee cultivation, such as a long stretch of land from east to west dotted with plateaus near the equator between the Tropic of Cancer and the Tropic of Cancer.

In 1602, the East India Company moved into the country and the Dutch colonial rule continued for more than 300 years, during which time the Arabica coffee tree (the Japanese name for a plant of the genus Coffea in the Rubiaceae family) was brought to Java and cultivated on plantations.

Specialty coffees are provided under high quality control throughout the supply chain, from cultivation to distribution, and have passed the strict cupping criteria (objective and comprehensive evaluation of the quality of the coffee, including sweetness, acidity, bitterness, subsequent aftertaste, and aroma).

In Indonesia, the world's fourth largest coffee producer, 70% of its production comes from the island of Sumatra, 90% of the total is Robusta, and only 10% is Arabica, which is a candidate for specialty coffee. 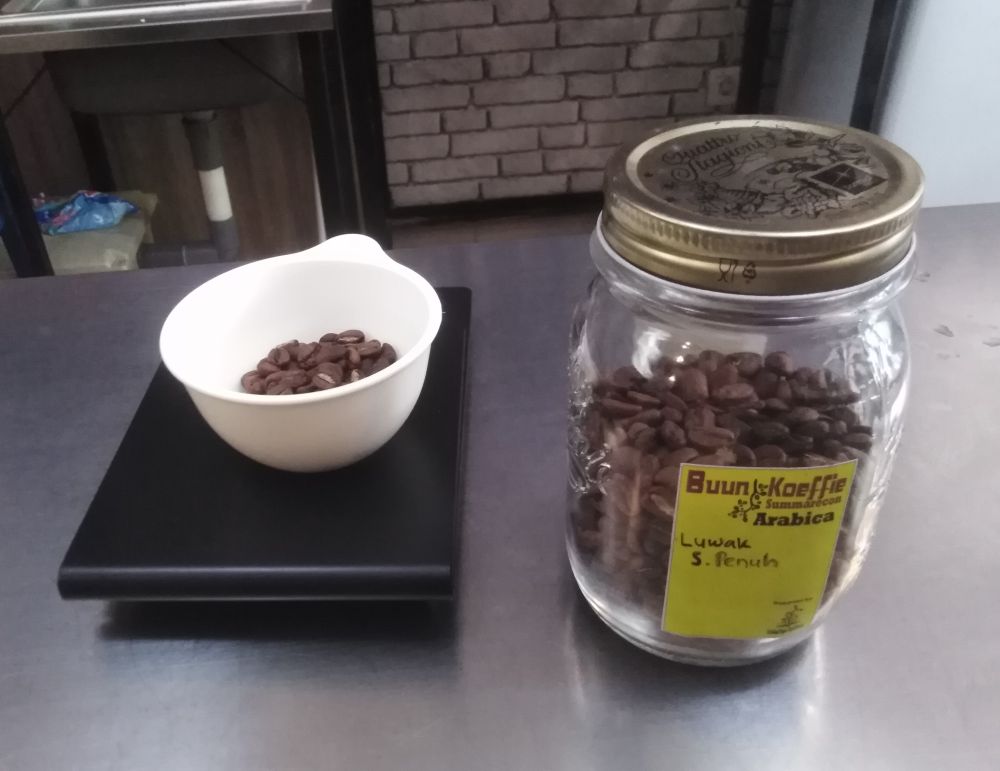 Robusta coffee with a strong bitterness is suitable for blending iced coffee, while Arabica coffee, which could be a specialty coffee for the remaining 10%, is grown in various parts of Indonesia, mainly in Sumatra.

In Java, there are still good quality Arabica coffee plantations around the Garungung volcano in West Java and the highlands of Semarang in Central Java.

The purpose of cupping specialty coffees is to evaluate whether or not the coffee clearly expresses the tendency of the flavor of the region of origin, and the SCAA (Specialty Coffee Association of America) scoring criteria, which is famous for objectively judging the sweetness, acidity, bitterness and lingering quality of the coffee, evaluates the coffee out of 100 points based on the following criteria.

If the coffee cherries (coffee berries) were harvested at the same time and under the same conditions at the exact same place and time, and the green beans were cleaned, selected, and refined under the same conditions, and then baked, ground, and brewed here, there would be a high probability of drinking coffee with the same flavor, aroma, and taste, but in reality, there is a long supply chain path for us, the end consumer, to drink coffee. 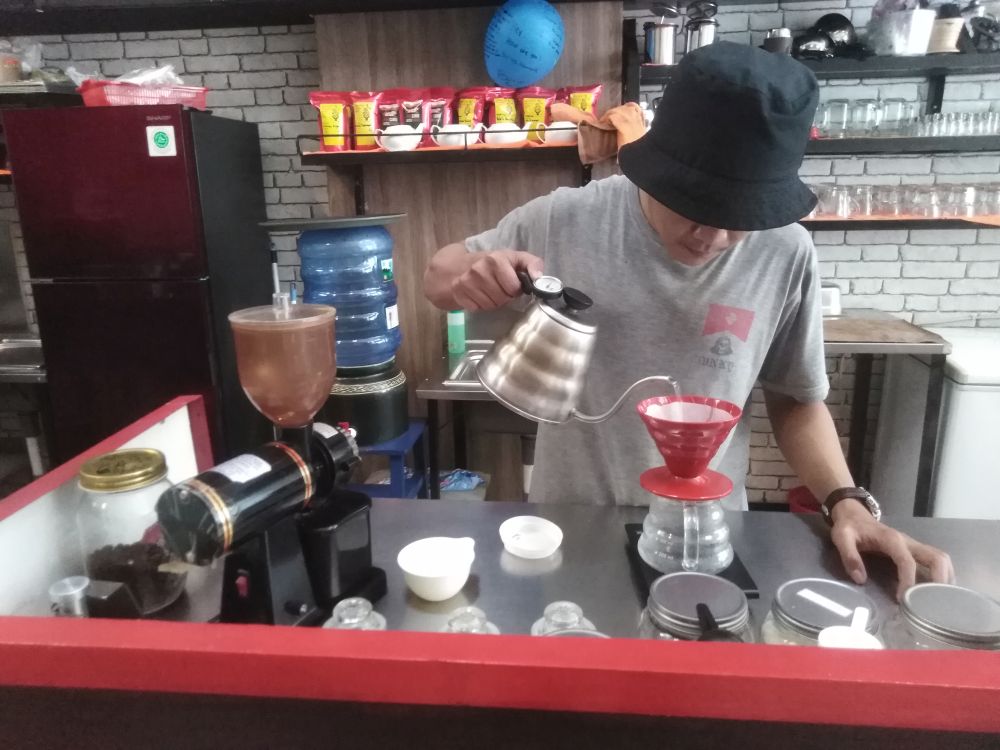 It's pretty serious and can't be underestimated.

If we try to categorize the coffee's flavor tendency according to the region of origin, we can't go any further if we are too particular about this process, so we can only evaluate the coffee as a result of either buying a proper single-origin coffee and brewing it ourselves, or trusting the barista or buyer of a reliable cafe.

Furthermore, in the case of luwak coffee, it is important that the raw material to be refined is 100% feces, not just the region of origin, so in order to evaluate, it is important to drink luwak coffee refined from the feces of civets that have eaten beans from various regions, and not only the unique flavor of the region of origin of the beans eaten, but also how strong the unique mild aroma of luwak is.

Cupping evaluation of Ruwak coffee from various regions in Jakarta

The name is Kopi Luwak (from Semarang, Central Java) 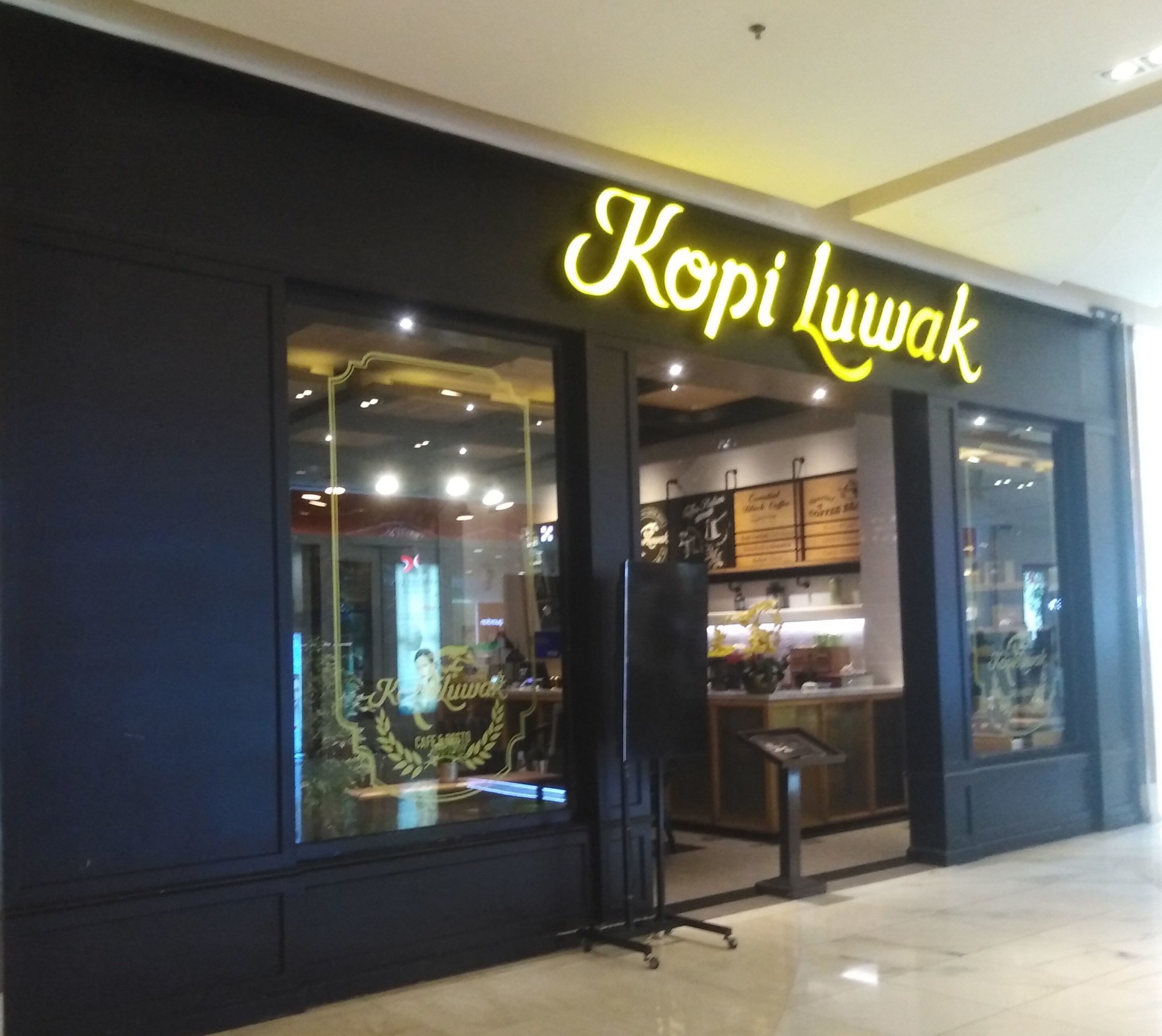 Kopi Luwak, as the shop is called, is trademarked by PT Java Prima Abadi, a general coffee grower founded in 1969, and has outlets in malls around Jakarta, including Grand Indonesia and Kota Kasablanca.

While the Robusta variety is mainly grown in Java and the Arabica coffee is not so famous, Kopi Luwak's luwak coffee is made from 100% refined luwak dung from its own plantation in Semarang, and you can drink 10g of the powder brewed in the tubruk (precipitation) method in the shop for Rp.89,000, but you can also buy 150g of the powder for Rp.650,000.

The settling method is to stir the coffee powder with a spoon while it is still drifting on the top of the cup and wait patiently for the powder to settle before drinking it.

Rp.89K luwak coffee at Kopi Luwak, from Arabica (cultivated) plantation in Semarang. After the ritual of sealing, expiration date and aroma check, it's tubruk, not saring, so I stir it, cover it, wait 2 minutes and drink it. The mellowness and acidity were not good enough for me, but a woman who looked like Riho Yoshioka explained it to me very carefully.

The coffee brewed with this "stir and wait two minutes" precipitation method does not produce the full acidity of the beans and the mellow aroma that is unique to luwak coffee at the moment of pouring hot water, so unfortunately it is not enough for me.

Excelso is a long-established Indonesian cafe that opened in 1991 in Plaza Indonesia, and until a few years ago, it was brewed by siphoning, but now you can drink a small cup of espresso with a cookie for Rp.115,000 yen per cup.

This 100% dung-rich luwak coffee from our own plantation in Tanah Toraja, Sulawesi, is a punchy coffee with a mellow mouthfeel and Toraja acidity, but it doesn't have a strong luwak aroma, so you might think it's just a regular Toraja coffee if not told.

Kedai Kopi in the city (from Jambi, Central Sumatra)

Indonesians love coffee, so Kedai Kopi (coffee shops) can be found everywhere in the city, and nowadays not only authentic cafes, but even the coffee served at roadside Kedai Kopi is clearly improving.

Our office is located in the development area of Summarecon in West Bekasi, but just around the corner is Kedai Kopi, a completely Indonesian middle-class target, which brews authentic manual brew single-origin coffee on the spot.

Among the mostly Rp.20,000 a cup of coffee from all over Indonesia, there is a Rp.40,000 a cup of Luwak coffee, which is refined on a coffee plantation in Luwak Sungai Penuh, the second city of Jambi province in central Sumatra.

Unfortunately, the acidity, which seems to be caused by the roasting process or storage method rather than the quality of the beans, was so strong that I found it hard to pour it down my stomach unless I was eating something.

Luwak coffee is the best and most cost-effective way to drink it at home. 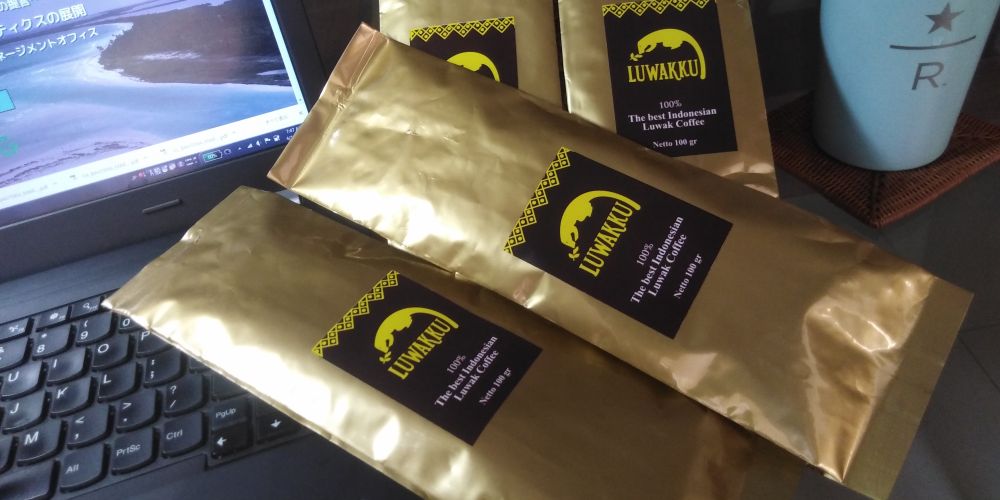 The mellow, intense aroma of Lewak coffee, created by the accidental fermentation process in the body of the civet, is its greatest appeal, and the flavors and after-tastes that you can feel on your tongue and nose in your mouth are more enjoyable than those of other specialty coffees.

I only come to Jakarta to buy coffee beans from a small shop near the entrance of a building full of small wholesalers in front of Blok M Plaza, Aceh Gayo 1kg Rp.220K, I think this taste and smell is very good.

Therefore, I came to the conclusion that the best way to drink Rp.140,000 per 100g of luwak coffee, which I bought at Batu Timbangan near the entrance of Pasar Melawai in front of Blok M Square in South Jakarta, is to grind it at home and drink it freshly brewed.

Just as you can enjoy the rich aroma of matsutake mushrooms while grilling them over charcoal at home rather than eating them in a restaurant, I think it's better to enjoy the mellow aroma of luwak coffee at home in two stages, when you grind the beans and when you brew them. 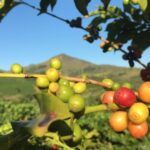 Coffee from Galunggung, where the rare Arabica species is cultivated in Java, Indonesia

As a feature of Garungun coffee, the unique aroma of the coffee is not strong, but you can feel the salty touch that sticks to the tongue, and you can feel a slight sourness at the end of drinking. 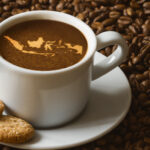 Indonesia's coffee cultivation has a long history of exporting to Europe during the colonial era. It was only in 2010, when nominal GDP per capita exceeded $3,000, that the demand for high quality coffee among Indonesians increased and began to be distributed domestically.

Time-limited services, such as flash sales and promotions, are generally effective for Indonesians, and breaking down the offerings into smaller pieces to ensure that they don't leave out every need is a common practice in the Indonesian service industry.

Why is sour coffee not a favorite?