Frangipani and adenium are not similar plants

The frangipani is considered to be the symbolic flower of Bali as it is often attached to canang, a Hindu offering in Bali, but many Japanese call it plumeria as it belongs to the Plumeria genus and is called Cambodia's flower (Bunga Kamboja) in Indonesia.

However, in Java, Bunga Kamboja, with its white flowers and thick dark green leaves, is often found in graveyards and is sometimes even called the 'Flower of the Dead' (Bunga Orang Mati), which does not seem to have a very auspicious image. 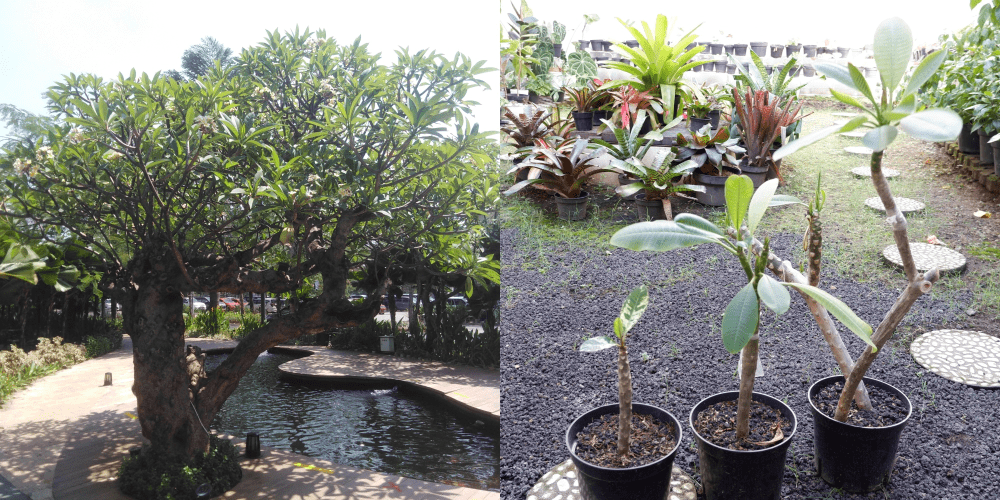 The frangipani is native to South America and not of Cambodian origin. However, in ancient times, people often planted them around cemeteries to provide shade for their tall growth, and it is believed that the flowers that fell on their graves carried magical and mystical energy.

Whenever I hear this anecdote, I am reminded of the story by Motojiro Kajii: "Under the cherry tree, there are dead bodies buried!".

The idea that the cherry blossoms bloom so beautifully because they must be absorbing nutrients from the corpse is a unique Asian idea, I think, in that it seeks a mystique about death. 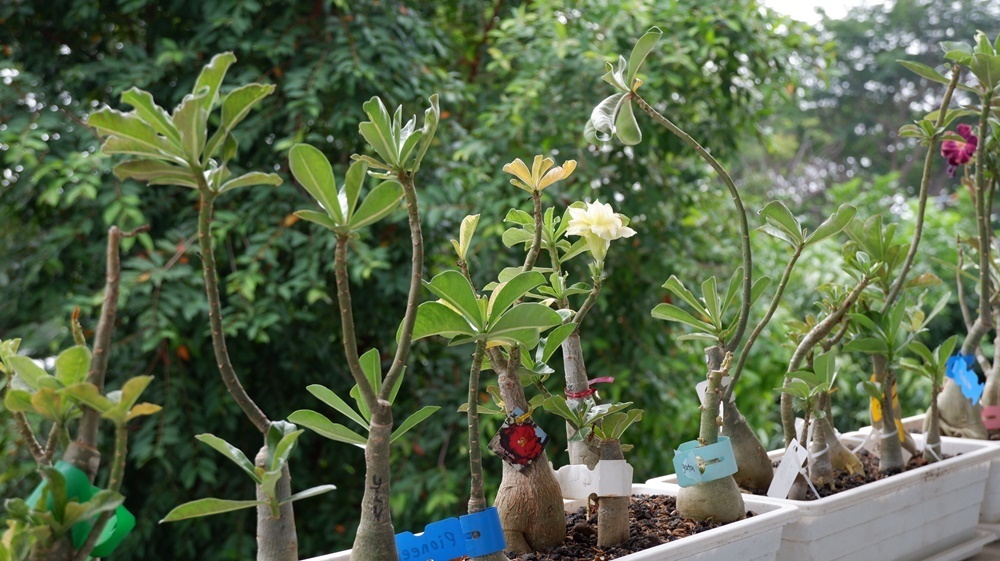 Adenium is native to the arid region, so I keep it on our hottest upstairs balcony.

And the plant that looks like a miniature frangipani and can be planted like a bonsai is called Japanese frangipani in English, but in Indonesia it is called kamboja Jepang (Cambodia in Japan) and is classified in the genus adenium, so it is directly called adenium.

Adenium derives its name from the Yemeni port city of Aden, and is native to the arid regions of Africa and the Arabian peninsula, where its tubers have the ability to store water, so the term "miniature version of frangipani" is a misnomer, as it has very different characteristics from the frangipani, which is in the genus Plumeria. 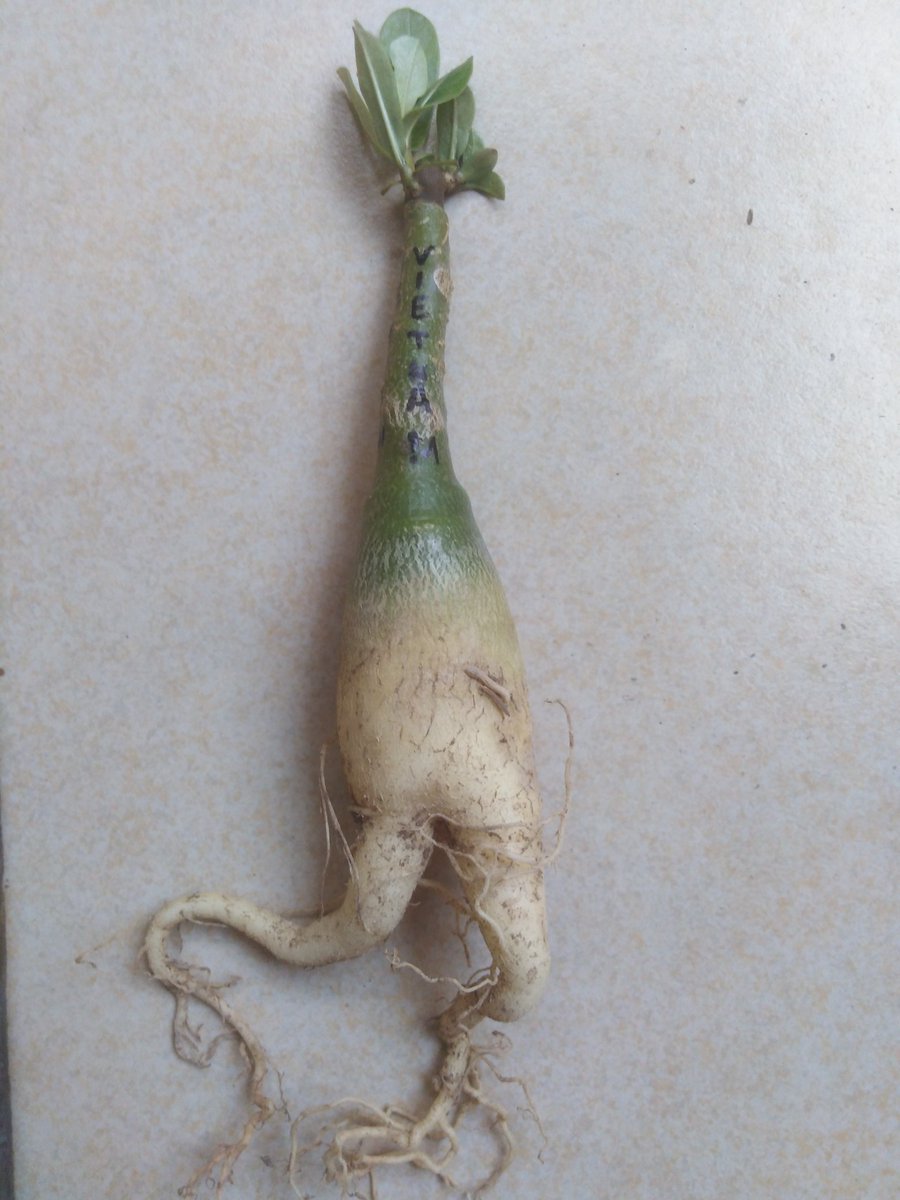 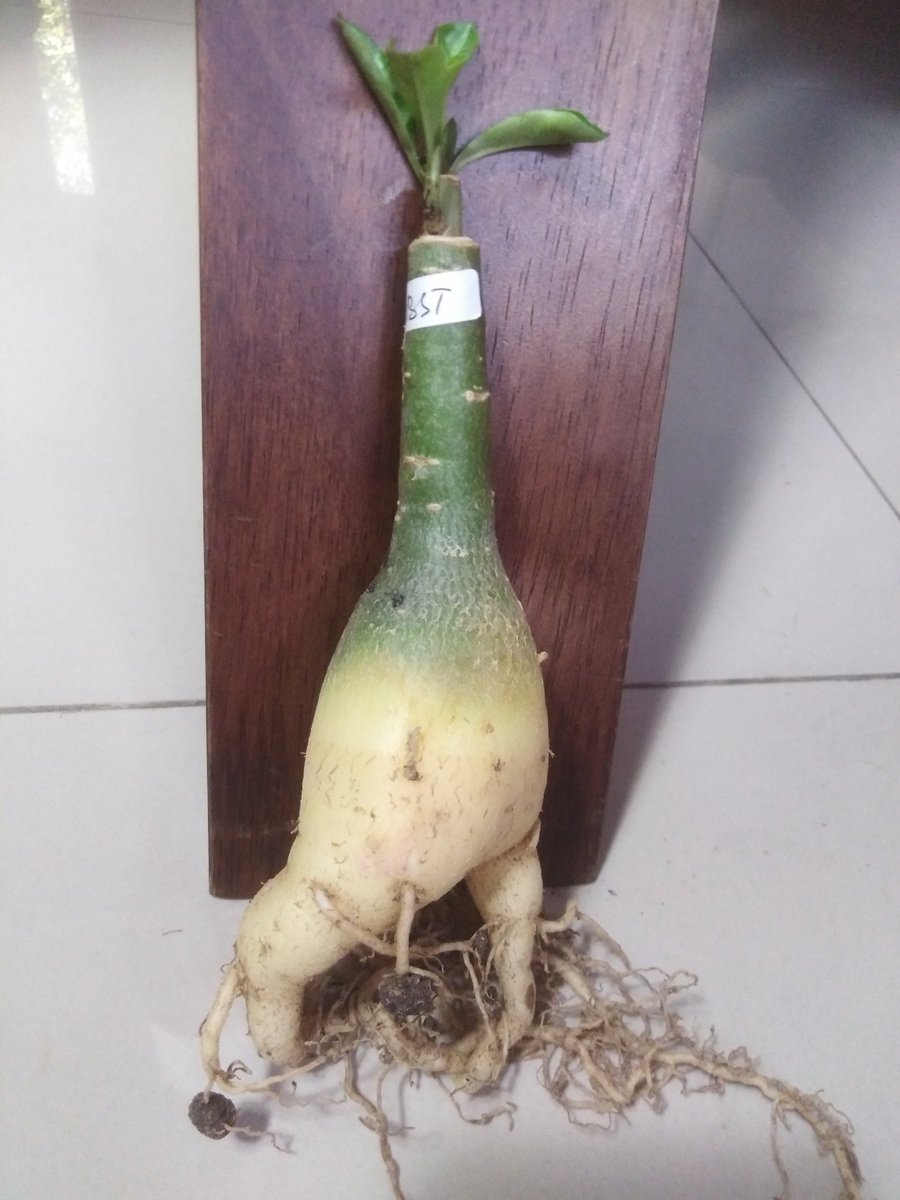 In Indonesia there is a stereotypical idea of naming the big ones Bangkok (Bangkok) and the small ones Jepang (Japan), for example, the big durian is called Durian Bangkok, the big, feisty chicken for cockfighting is called ayam Bangkok, and the frangipani A miniature version of adenium is called kamboja Jepang, and women's sanitary napkins are sometimes called roti Jepang (Japanese bread).

Adeniums are prone to pests.

One of the top three spider mite prone plants we grow is the adenium, and when I check the leaves when I feel they are yellow and listless, I find spider threads near the base of the leaves and black spots of mites on the underside of the leaves, so I spray the affected area with an insecticide (anti hama), scrape it off with my finger and then wipe it off with a wet wipe.

Unlike frangipani, adeniums have trumpet-shaped flowers with a hollow center.

Adeniums are known as 'desert roses' by nature and are often placed on sunny balconies or by pools, where they can be scorched by direct sunlight in the daytime, but they have a habit of trying to store water and nutrients in their tubers, so if you water and fertilize them too much because of the dryness, the tuber itself will rot and soften. 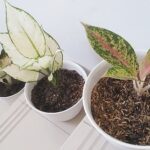 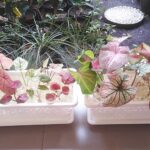 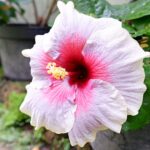